Military recruits: How MoD could be targeting your children

Only ‘Show and Tell’? Latest news on Scottish Parliament Petition

After hearing from the armed forces, the Scottish Parliament's Public Petitions Committee has decided they need to hear more from ForcesWatch and Quakers in Scotland before making decisions about our petition calling for greater guidance and scrutiny around military visits to schools.

Dissenting from the Old Lie

Every year, the fury levied at those who critique or refuse the red poppy obscures the complexity and spectrum of views such dissenters open up. What is lost in this explosion of vitriol and misunderstanding is the opportunity to allow us, as empathic human beings, to be open to divergent viewpoints, to think honestly about wars and to discuss their causes.

We report from the day of talks and workshops to launch the Take Action on Militarism pack which is designed to equip and support those challenging militarism in their communities. 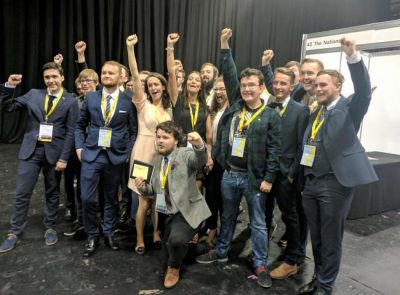 A passionate debate was held on Sunday 8 October at the SNP Conference on Raising the Minimum Age of Military Recruitment to 18. The motion was passed!

Is pushing the cadets really in pupils’ best interests?

Cadet units are not a social panacea but a recruitment tool. Our article, published in Schools Week, critiques the social impact report being used by the MoD to validate the expansion of cadets in state schools.

The Ministry of Defence has no place in our schools

Children don’t need militarism. They need a decent learning environment, writes Rhianna Louise. Our piece in The Morning Star about the latest announcement of more cadet units in schools and the problematic social impact report that has been published to support this.

This article by Jonathan Parry. Lecturer in Global Ethics at the University of Birmingham, explores the dangers involved in miltary activity in schools and for the youngest recruits. It emphasises the moral risks and the 'moral exploitation' involved.

Dr Brian Belton, a leading international authority on youth work, gives his thoughts on the report: What is the social impact resulting from the expenditure on cadets? He argues that, 'the modern world does not require conformity, it demands innovation'.